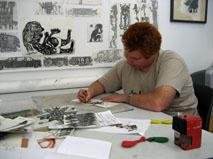 Leonhard Fink was born on January 15, 1982. He grew up with his parents and four siblings in the Lower Austrian town of Weidling (now part of Klosterneuburg). His father is a geographer and geologist, which also explains Fink’s great interest in these subjects. Fink attended the Hauptschule (basic, lower-level secondary school) in Weidling; his knowledge of English, which he repeatedly employs in the texts in his works, goes back to this schooling. He received psychiatric treatment for the first time at 17, and this is also when he created the first drawings exhibiting signs of his artistic talent. In 2001 he began regularly visiting the “open atelier gugging”, where he soon arrived at his own distinctive and very succinct form of artistic expression. In 2007 he began creating his first cartographic drawings, which represent the most important works in his oeuvre. Fink is represented by the galerie gugging, and his works have been exhibited in the museum gugging since 2012. (text Gugging).